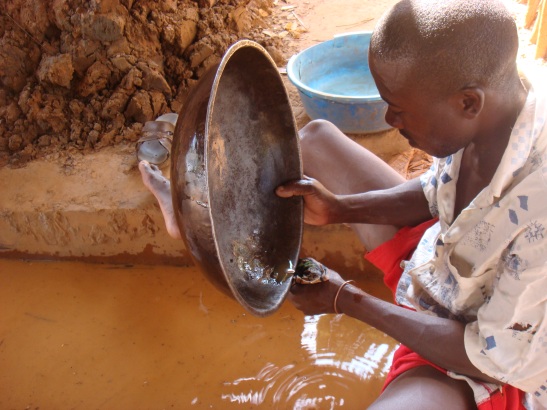 An artisanal Miner ecking a living out of grounded waste rocks at a disposal site in Nzega – Tabora, Tanzania. PHOTO/Afrikayetu

“For as the rain and the snow come down from heaven, and do not return there until they have watered the earth, making it bring forth and sprout,    giving seed to the sower and bread to the eater, so shall my word be that goes out from my mouth; it shall not return to me empty, but it shall accomplish that which I purpose, and succeed in the thing for which I sent it. For you shall go out in joy, and be led back in peace; the mountains and the hills before you shall burst into song and all the trees of the field shall clap their hands. Instead of the thorn shall come up the cypress; instead of the brier shall come up the myrtle; and it shall be to the Lord for a memorial, for an everlasting sign that shall not be cut off” (NRSV[1])

God is ‘dead’! How can a God of love, justice and peace allow misery among the objects of such attributes as identifiable with the Creator of heaven and earth? Drawing conclusions such as suggesting the ‘inexistence’ and ‘passivity’ of God and questioning God’s legitimacy to claim such attributes identifiable with a being personifying love, justice and peace are often echoed when life experiences seem unfavourable to us.

This becomes even more visible to a despairing point when all the efforts we make to achieve an equitable human society are plagued by unnumbered challenges. This raises other questions but the most prominent one becomes, ‘is it worth doing anything as a contribution towards justice and a world where we all shall be equal’? The neoliberalising capitalist discourses appear to make successful advances legitimising their destructive activities in relation to exploiting natural/mineral resources which leaves the environment and its inhabitants in a sorry state. In comparison,    the contesting voices from the advocates of redistributive justice seem to be drowned in waves of an invasive neoliberal sociopolitical, environmental and economic nature. This leads to discouragement.

But in depicting practical life experiences, Isaiah 55: 10 – 13 draws our attention to four important characteristics which should be embodied in our pursuit of an equitable world. These are identified as the indiscriminate, ‘voluntary’, resilient and restorative nature of rain- and snowfall.

We are currently in the rainy season preceded by a fierce winter period which not many people talk favourably about. Even though each one of us may have different opinions on the rain- and snowfall, the indiscriminate nature of these elements of nature remains unchanged. Even though human activity has contributed greatly to the changing phases of our environments and the climatic patterns, rain and snow still fall. Deductively, and from the scriptural point of view, rain and snowfall happen voluntarily and of their own accord. An interesting element of rain and snowfall is the fact that once they fall, they “do not return” (vs 10) where they came from until their work is done. In other words, rain and snow do not look back in expectation of a reward even though this is alluded to as the end results in harvest for the sower is sustenance.

Even though human activity, in pursuit of ‘sustainable’ development has in many ways contributed to the climatic changes we see around us, rain and snowfall remain ongoing, as it were, driven by a desire to replenish the earth and its inhabitants. In an indefatigable manner and not expecting much from its recipients, rain- and snowfall continue to reach out to the inhabitants of Mother earth not asking any reparation (v. 10). In human language, this could be similar to the activities of many social justice advocates who work tirelessly with an objective of seeing good and encouraging outcomes. The resilience of rain- and snowfall is seen clearly as they fall on both the bad and the good, in and out of season (2 Timothy 4: 2).

Further, using rain and snow fall characteristics, Isaiah’s writing brings an encouragement to human efforts towards securing an equitable society by indicating that such efforts are effective as they give not only hope of new life (vv. 10, 11),  but are also appreciated by its recipients (vs  12), as well as bringing enduring change (v. 13). This imagery presented, suggests what should be the characteristic of people involved in social justice work. Even though confronted by challenging opposition from the neoliberalising capitalist discourses, we should also be in a position to identify changes that come from the work we do. The latter serves as our encouragement. Just as in the rain and snowfall imagery, our work towards an equitable society, even though slow and filled with discouragements, results in the slow trends of sociopolitical, environmental and economic change and our work is not in vain.  God blesses every effort made by the faithful. God is neither dead nor passive.

This entry was posted on Feb 27, 2015 by AfrikaYetu in Extractive Industry, Integrity & Accountability, Religion, Rights, The Society.