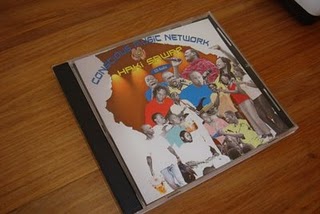 To make great music with a message and influence youths, that is the aim of the Conscious Music Network. The musicians are now launching their new CD titled Haki Sawa – Equal Rights.

“The aim is to reach different youth groups in their local and religious settings. We want through conscious music to sensitize them on their career, how to fight corruption, promote peace, justice, unity and to know their rights”, says Pona Bukuku, chairman of the network committee. We want to encourage young people and the society to use the knowledge they have to eradicate poverty, but also to make people aware on how to avoid activities that would endanger their lives.”

Since the inception of Conscious Music Network (CMN) in April, more than four performances have been staged in Dar es Salaam and some outside the city reaching people even by performing on the street.
The group consists of both established and up and coming young artists. Abel Motika – aka Mr. Ebbo is a prominent member of the group. “We advocate for change in communities around Tanzania. The aim is to raise awareness among the communities on different issues especially on good governance, poverty eradication, economic justice, social justice and HIV/AIDS,” Mr. Ebbo said.

“Conscious music promotes behaviour change among the youth of Tanzania. We want to restore human dignity among people who have been violated by corruption, injustice and stigma. To make people recognize who they are and what responsibilities they have in their respective communities. We are going to use this music family to empower youths on how they can be resourceful and active in the society and be part of the efforts geared to eradicate poverty in Tanzania.”

The Conscious Music Network has recorded a 12 track album with the title “Haki Sawa” (equal rights). The group aims at working together with youths from Tanzania, East Africa, Africa and the world to bring positive change for all. The group is supported by Norwegian Church Aid (NCA) Tanzania.

This entry was posted on Mar 23, 2011 by My Perspectives in Our Voices, Politics & Democracy.